It’s easy to forget how good some horror films are given the junk that populates the genre.  I would count most of these titles among my all-time favorite films, but especially the top 5.  (And “Jaws,” of course.  A reminder that the film is exempt.)  If you haven’t seen the first installment of the list, click here.  Now, let’s get on with it.

The peculiar fella at the old gas station warns you against going any further if you’re frightened by spoilers.

It’s probably clear by now that I’m a bigger fan of psychological horror than that of the splatter variety.  I just see gore as an easy means to get a rise out of an audience.  Few films manage psychological terror as well as “Rosemary’s Baby.”  Roman Polanski’s film is about a young woman (Mia Farrow) and her husband, who’ve just moved into a new apartment with plans to have a baby.  Her next door neighbors may…or may not…be interested in using her unborn child in a satanic ritual.  The film is a masterclass in compositions.  When we meet the husband next door, he’s staged on the left side of the frame in a wide shot.  The right side is empty.  Why the unbalance?  Why are we being kept at a distance from him?  Also check out a scene where Ruth Gordon’s Minnie, the next door wife, calls a doctor for Rosemary.  As Minnie makes the call, the camera is positioned outside the room such that her face is cut off by the door frame.  What are Minnie’s intentions?  What’s being said on the other end of the phone?  What does all this mean for Rosemary?  Polanski’s choices make you nervous, ratcheting up the paranoia. 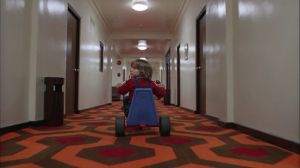 While its characterizations might be a little thin, “The Shining” works remarkably well on an atmospheric level.  From the opening credits, director Stanley Kubrick has me on edge.  A helicopter shot follows Jack Torrance’s car as it drives through a mountain range, just a speck in this rugged landscape.  The droning score and use of a wide-angle lens to ever-so-slightly distort the image never fails to put a knot in my stomach.  This adaptation of Stephen King’s novel, about a family overseeing a vacant hotel, is pretty unconventional for a horror film.  Yes, we’re stuck with characters in a confined (and haunted) space, but consider how the film is shot and lit.  Kubrick doesn’t use the darkness as a crutch.  Even night scenes — I’m thinking of Jack Nicholson chasing poor Danny Lloyd through a snowy hedge maze — are made clear with diffused lighting.  So many of the hotel’s interiors are brightly lit and fully in focus.  We watch young Danny play in the hallways, as series of doors stretch in either direction.  Danger could come from any one of them.

In its two hour running time, “The Silence of the Lambs” accomplishes so much.  It’s a procedural, as the FBI hunts a serial killer named Buffalo Bill.  It’s a human drama, as trainee Clarice Starling (Jodie Foster) attempts to silence her demons by finding Bill’s kidnap victim before it’s too late.  It’s a feminist film, as Clarice navigates the politics of male-dominated law enforcement.  And yes, it’s a horror film, as evidenced not just by Buffalo Bill but Dr. Hannibal “the Cannibal” Lecter (Anthony Hopkins).  The first 10 minutes build anticipation and then undercut expectation.  We learn about Hannibal from Clarice’s superior and from his doctor at the asylum.  “Don’t let him inside your head,” “He’s a monster,” etc.  The doctor shows Clarice a picture of a nurse disfigured by Hannibal.  In a great bit of restraint, director Jonathan Demme refrains from showing us the photo.  Instead, we get the doctor’s description and Foster’s great reaction.  “His pulse never got above 85, even when he ate her tongue.”  As Clarice approaches Hannibal’s cell, we’re waiting for a gibbering madman.  What we get is the cool and calm cordiality of Anthony Hopkins.  This is a killer you might invite into your home.  The scene still gives me shivers.

I could watch “Alien” any time.  There’s a great economy of storytelling, with the screenwriters offering brief character sketches.  He’s the laid back Captain, he’s the alpha-male, she’s high strung.  There’s enough personality for us to care about these people.  Miners in space, they wake up from hyper sleep to a distress signal from a nearby planet.  Or maybe that signal is a warning?  I love the slow burn of the film, nothing horrific happens for about 40 minutes.  The strategy pays off thanks to director Ridley Scott and designer H.R. Giger.  Star Sigourney Weaver has said that she initially assumed she’d signed on to a B-movie, but Scott and Giger bring A-level craft.  The sets are all practical, the gloomy hallways of the mining vessel and the gooey corridors of the alien craft have often been imitated.  And then there’s the creature itself — brilliant in concept and execution.  It “impregnates” an individual and a critter comes bursting from the host’s chest.  The adult form is menacing as hell (and slightly phallic).  Contrary to many horror films, our characters make smart decisions to try to best this baddie, but they’re just inherently ill equipped to deal with the problem. 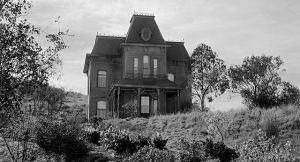 I excluded “Jaws” to resist the obvious, and then #1 comes along and I make the next most predictable choice.  But what are ya gonna do?  Alfred Hitchcock’s “Psycho” was a watershed moment in movies.  So much has been written about the film that I’m at a bit of a loss…so I’ll focus on two elements.  First, Bernard Hermann’s iconic score.  It’s excellent.  And I’m not just talking about the shower scene.  Consider how long it takes Marion Crane (Janet Leigh) to meet the business end of a knife.  We spend 50-ish minutes with her — she steals money from her bank, hightails it out of town, and meets a nice hotel clerk named Norman (Anthony Perkins).  This doesn’t look like the movie we signed up for, but it sure as hell sounds like it!  From the opening credits, Herrmann’s driving score leaves little doubt about the type of film we’re watching.  And then there’s that final twist, the one that reveals the nice hotel clerk occasionally masquerades in his mother’s clothes and knifes young women.  It’s tricky to follow one massive twist – Marion’s murder — with another.  Your audience is primed, looking in every nook and cranny (literally and narratively) for something to jump out.  But Hitchcock pulls the rug out from under us twice.  We watch as Norman dutifully cleans up his…uh…mother’s mess, placing Marion’s corpse in her own car and wiping down the bathroom.  It’s a great, dialog-less sequence that puts us in his corner.  Reportedly, audiences in 1960 gasped when it looked as though Marion’s car wouldn’t sink in the swamp.  “We’ve just seen this terrible murder.  Surely, this guy’s safe.  Right?  Right!?”  Admittedly, I suspect “Psycho” was instrumental in making audiences suspicious of their narratives.  Everything since has had to contend with that.

Thanks for reading! Here’s my complete “Jaws” Memorial List:

Honorable mentions include: “The Blair Witch Project,” “The Devil’s Backbone,” “The Innocents,” and “Invasion of the Body Snatchers” (the version from 1956 and ’78).

Do you have a favorite horror film? Comment below.