Welcome back, “Breaking Bad” fans…or addicts, if you prefer.  As you know, I’m celebrating the show’s latest (and final) Emmy win by revealing my 10 favorite episodes.  If you haven’t already, be sure to check out the first half of my list.  Just a reminder: there are spoilers below.

New Mexico has always been a character in this show.  One of my favorite moments to feature the unforgiving landscape comes in “Crawl Space.”  Gus drags Walt into the desert, where he delivers a threat against Walt’s entire family.  We cut to a wide shot as clouds roll across the sun, casting wavy shadows on the two, just blots in that open expanse of sand.  Maybe I’m not watching the right shows, but I can’t think of any that would take the time to sit on a long take like this.  Walt returns from the desert with a plan to pay a “disappearer” to whisk his family to safety.  Crawling under the house where he keeps his money, he discovers that his wife has given it to her boss, who owes the IRS, in an effort to prevent investigations into her family’s finances.  What follows is an astounding synchronization of performance, sound, and camerawork.  Out of options, Walt can’t help but marvel at how the fates have aligned against him.  He laughs maniacally.  Anna Gunn as Skyler plays the moment wide-eyed, as though she’s just stumbled into a horror movie.  She has.  Dave Porter’s score pulses like half a heartbeat.  The phone rings, a warning siren.  Walt’s laughter subsides as the camera rises toward the ceiling, peering down at him, as he lies in the dirt under his house.  Like a grave.

Now’s as good a time as any to talk about the revelation that is Bryan Cranston.  “Crazy Handful of Nothin’,” we meet Walter White’s alter ego, Heisenberg.  It’s not as on-the-nose as Dr. Jekyll and Mr. Hyde, but by the final couple seasons, the lines of delineation between Walt and Heisenberg practically disappear.  At the end of this episode, having made an example of Tuco, Heisenberg cooly ambles out of his compound.  Once he’s reached safety, the facade falls and Walt is overcome by adrenaline.  Shaking and yelling, spit flying from his mouth, it’s a testament to Cranston’s abilities, but it also illustrates the creators’ willingness to maintain a human core.  “Breaking Bad” isn’t populated by super heroes or super villains.

“You got one part wrong, this is not meth.” 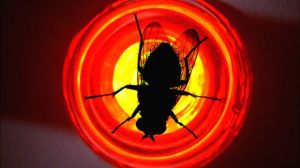 This might be a controversial pick.  There isn’t another “Breaking Bad” episode like it.  After finding a “contaminant” (a house fly) in the meth lab, Walt is convinced that he and Jesse must go on lockdown until it’s eliminated.  It’s basically a two-man play, as we spend the entirety of this episode in one location.  Rian Johnson’s aggressive yet never intrusive camerawork keeps things from feeling too stagey.  (If that name sounds familiar, Johnson wrote and directed “Brick,” “Looper,” and he’s behind Star Wars: Episode VIII.)  I love that we have an opportunity to delve deeper into these characters and witness them learning more about each other.  During the episode, Jesse drugs Walt to calm him down.  Less than sober, Walt nearly reveals a terrible secret that could have massive ramifications.  It’s as tense as anything in the show, and it’s done without a gun, an axe, or exploding meth. 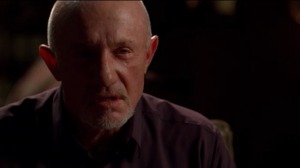 I’m cheating here by lumping these two together, but I think it’s warranted.  “Half Measures” finds Jesse trying to avenge the murder of a former partner.  Walter is a wet blanket, not wanting to rock the boat with Gus.  The episode contains a series highlight:  Mike, one of Gus’ enforcers, tells Walt about his time as a beat cop, specifically when he allowed an abusive husband to return home to his wife.  It’s a stirring example of the writers’ talent with dialog and the show’s ability to breathe life into even minor characters.  Jonathan Banks nails it, delivering loaded language without a scrap of emotion.  When Heisenberg finally rears his head, it’s incredibly satisfying.  “Full Measures” deals with the fallout of the previous episode.  It’s a thrilling chess match between Walt and Gus, culminating in a stunning cliffhanger–a strategy the show rarely used.  The episode also illustrates the visual prowess of “Breaking Bad.”  A meeting between Walt and Jesse takes place at a closed arcade, where flashing lights gleam through sheets of plastic.  Who woulda thought an arcade could look grim!

And here we are, my #1 “Breaking Bad” episode.  The primary reason – and there are many – that “Ozymandias” is so brilliant is that it delivers the show’s climax.  So many shows structure their last season so that everything builds toward a final episode.  Sorry “Lost,” gotta ding you again.  Vince Gilligan and his collaborators, Emmy-winning writer Moira Walley-Beckett and director Rian Johnson, bring swift and brutal retribution to Walter White as all his chickens come home to roost.  Over a year spent building his empire and trying to keep his family safe, and it’s all destroyed in less than a day.  Another element of this episode, indeed the last few episodes, that I appreciate is the way the writers re-incorporate elements from early in the show’s run.  Here, I’m referring to Walt’s admission to Jesse, “I watched Jane die.”  It’s truly shocking, yet shouldn’t come as a surprise.  So many hallmark moments here:  Hank’s execution, the knife fight, Walt rolling the vestiges of his wealth through the desert, his final phone call to Skyler.

“Nothing beside remains. Round the decay of that colossal wreck, boundless and bare, the lone and level sands stretch far away.

I feel like I’ve only scratched the surface of “Breaking Bad” with these two posts, and I hardly sang the praises of Aaron Paul.  For a strong showcase of the actor’s talent, I’d suggest “Problem Dog” from season four. Coincidentally, that’s probably my favorite season – much as I hate picking one…feels like choosing a favorite child – yet only one of its episodes made the cut.

Do you agree or disagree with my list?  What are you favorite episodes of “Breaking Bad?”  Comment below!

In honor of its second (and final) Emmy win for Best Drama Series, I’m devoting this week’s post to “Breaking Bad.”  Novelistic in its observations and depth of its characters and cinematic in its visuals, it’s a show that means so very much to me.  Fair warning:  if you’re not caught up, you may not want to read any further.

As a farewell, here are my top 10 episodes (in two parts): 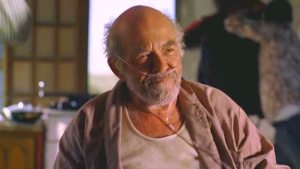 This episode introduces one of my favorite characters:  Hector Salamanca.  He’s a wheelchair-bound drug lord who communicates with a service bell and may…or may not…be lucid.  His nephew, an uber-paranoid drug dealer named Tuco, kidnaps Walt and Jesse.  He holds them prisoner in a small desert house where he cares for Hector.  There’s an agonizing suspense sequence centered around our protagonists’ attempt to poison Tuco’s food.  The episode also plays up the dark comic undertones of “Breaking Bad,” as the writers have some fun with the characters’ assumptions about Hector’s mental capacity.

The episode that started it all!  Vince Gilligan and company squeeze a remarkable amount of plot and character into one hour.  They set up Walter White’s family dynamic, his cancer, that he’s a man who feels unfulfilled.  They establish his desire to cook meth and leave a legacy.  The first episode introduces Jesse, Walt’s former dead-beat student, and his alpha-male brother-in-law (and DEA agent) Hank.  There’s a great thesis statement for the series, where Walt talks to his students about chemistry being the study of change.  Though I generally prefer slow-burn “Breaking Bad” to heavily plotted “Breaking Bad,” it’s hard not to admire all the creators accomplished here.  They had a lot of pieces to put in place, and they were really going for broke the first time out. 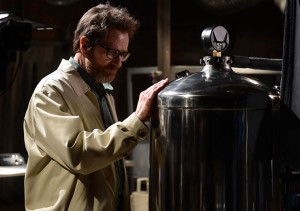 As much as I look forward to seeing how a story will end, I’m pretty apprehensive when it comes to series finales.  Thanks a lot, “Lost.”  Surely nothing can live up to that hype and anticipation!  But “Breaking Bad” did.  Matt Zoller Seitz wrote a great article about how the final episode is a Rorschach.  If you want to see a clean and happy ending, it’s there.  I watch those final moments and acknowledge that, yes, Walt dies in a way that pleases him most.  He’s alone in his meth lab with the equipment that kept his blood pumping.  And yet, how sad is that.  The ending is also a great demonstration of the show’s on-point song selection.  I still get a lump in my throat when Walt lovingly holds his gas mask to the sound of Badfinger’s “Baby Blue.”

“Dead Freight” might be the series’ most ambitious episode.  Walt and Jesse, along with partners Mike and Todd, engineer a train robbery so they can restore their supply of methylamine.  It’s a straight up Western! (Genre imagery and Jesse James parallels abound in this season.)  The plan is to stop the train with an obstruction on the track, pump out the chemicals and replace them with water before anyone notices.  So much tension hinges on watching the counter tick by.  Dave Porter’s driving score makes this 10-minute robbery feel like a full episode of armrest-peeling suspense.  And I haven’t even talked about that eerie cold open or its tragic bookend.

This is when I knew I was watching something really special.  It completes a three-episode arc that started with a cook going bad in the Pilot.  Walt and Jesse need to dispose of two drug dealers — one dead and the other still breathing.  The latter is Krazy-8. Walt has him tied up in Jesse’s basement while he decides how to kill him.  One of the things I appreciate most about “Breaking Bad” is that it doesn’t treat its audience like restless teenagers.  Scenes are allowed to breathe.  The show’s creators afford a lot of time to Walt’s first kill.  Racked with guilt, he convinces himself that he can set the man free without reprisal.  Only at that point, through a nifty bit of character writing, does he realize that Krazy-8 is armed.  Now Walt can’t let him go, and he can’t keep him locked up.  A recurring flashback of Walt in college, calculating the composition of the human body, adds a lot of poignancy to the episode.