I’ve got it. The next big trend in physical fitness. All you need to do is watch Denis Villeneuve’s “Sicario,” once a day, every day, and the pounds will melt off in no time.  From its opening moments, depicting a raid on a drug house, the film is sweaty-palms suspenseful.

FBI agent Kate Macer (Emily Blunt) is part of that raid.  Soon after, she’s recruited into a task force, which includes Josh Brolin’s Matt Graver and Benicio del Toro’s Alejandro Gillick.  They’re to take down a major drug kingpin in Mexico.  Kate, unsure of whom to trust even on her own team, realizes she’s swimming in dark and dangerous waters.

The main cast — Blunt, del Toro and Brolin — are really strong.  Brolin, with his wry smile and reluctance to give up information, generates a lot of nervous laughs.  But del Toro is the MVP.  In one of my favorite moments, shortly after we (and Kate) have met him, he’s sleeping on an airplane and his hand starts to twitch and then he wakes with a start.  The smallest suggestion that under the enigmatic and menacing exterior, there’s a lot of pain and sadness. 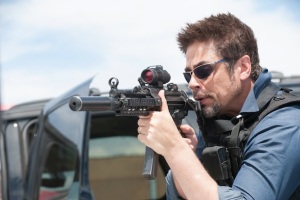 Taylor Sheridan’s screenplay doesn’t provide Blunt’s Kate with a whole lot of background or even agency, but that’s why you cast one of the best actresses of her generation.  In an early exchange, we learn that she’s divorced and doesn’t have kids.  No family attachments.  (How’s that for foreboding?)  Throughout the film, she often finds herself on the losing end of conflicts, which is a little unusual for mainstream audiences.  I didn’t mind it so much, as it felt emblematic of the drug war itself.  It’s a losing battle.

The action setpieces have a real sense of presence.  Explosions aren’t accompanied with the standard fireball.  They’re concussive forces, throwing our heroes to the ground.  Kevlar vests don’t keep characters free from harm.  Bullets still knock the wind out of them, leaving them gasping for air.  Interrogations aren’t performed with a lot of flapping and yelling but cold and quiet intimidation.  I’ve never witnessed a real explosion, been shot at or interrogated — knock on wood — but these moments felt refreshingly absent any trumped up Hollywood conventions.

Indeed, the film achieves all this without resorting to cinema verite techniques (handheld camera, extensive film grain, etc.).  I’ve talked about Cinematographer Roger Deakins on the blog before, and I can’t overstate his skill and artistry behind the camera.  In what’s sure to be one of the shots of the year, a group of gunmen are preparing for a dangerous trek underground at sunset.  As they move across the barren desert landscape, their silhouettes appear against the nearly-night sky and slowly sink into the dark horizon.

Deakins and Villeneuve employ a lot of helicopter shots, particularly as the task force is driving across the border into Mexico for a mission.  Being a fan of “The Shining,” I couldn’t help but think of the opening moments of Stanley Kubrick’s film as Jack Torrance drives to the film’s haunted hotel.  The effect here is similar, as we watch from on high as our characters navigate into trouble.

Due to its blistering intensity and pessimistic worldview, “Sicario” isn’t going to be a film for everyone.  But if you’re willing to take the ride, I think the craftsmanship and strong performances are definitely worth your time.

Have you seen “Sicario?”  What did you think?  Comment below and thanks for reading!

Like it or not, the success of “Twilight” brought a resurgence of all things vampire.  From the multiplex (“Dracula Untold”) to the art house (“Let the Right One In”) to television (“True Blood”)…they saturate our culture.  Talk about the undead!  It would be easy to say Die already, vamps! were it not for signs of life like Ana Lily Amirpour’s “A Girl Walks Home Alone at Night.” 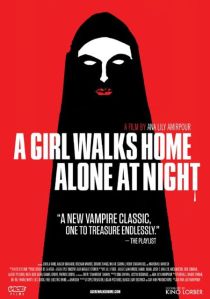 A young man, Arash (Arash Marandi) and his heroin-addicted father are preyed upon by a local drug dealer.  That is, until the drug dealer has a run in with the titular vampire (Sheila Vand).  The Girl — that’s how she’s referred to in the credits — has her sights set on more than just the neighborhood underworld.  In one of the movie’s most chilling scenes (and a great twist on standard gender roles), she menaces a mischievous young boy.  “Have you been good?” she snarls in his ear.  After the boy flees, she commandeers his skateboard and rolls down the center of a desolate street, her lonely eyes gazing up at the lights.

Produced in Southern California but set in a fictional Iranian ghost town called Bad City, “A Girl Walks Home Alone” has a number of interesting dichotomies.  Indeed, none more than Vand in the main role.  She’s a real marvel in the way she balances sad and sinister.  We meet her, listless, sitting alone in her apartment, listening to music.  We don’t yet know she’s a vampire, but her small frame belies a real ferocity.  When she’s on, she’s unblinking and invasive.  She leans forward and imposes herself on the other actors like a cobra lording over its prey.  When the Girl meets Arash at a party, he’s dressed as Dracula.  Not knowing how she’d react had me on edge.  The character is great for creating that kind of tension.

The film isn’t heavy on plot or narrative.  The more languid passages, characters searching for connection in a lonely town, recall the work of Jim Jarmusch.  (Just last year, Jarmusch took a stab at the vampire genre with “Only Lovers Left Alive.”  It was set in another ghost town known as Detroit.)  Like that indie filmmaker’s early work, ”A Girl…” was shot in gloomy black and white.  Amidst a dilapidated landscape, Director of Photography Lyle Vincent’s 2.35:1 compositions serve to isolate the characters.  The film feels like a Western with its barren and wind-swept streets, making the need for human connection that much greater.

Even if kinship isn’t always in the characters’ best interest.

Have you seen “A Girl Walks Home Alone at Night?” Comment Below!

If you haven’t, check it out! It’s available on iTunes.

“It Follows” opens wide this weekend, and what follows is my review.  No real spoilers, especially if you’ve seen the trailer, but if you wanna remain completely in the dark — so creepy! — see the film first.

I’m a little reluctant to compare new films to seminal pieces of work.  “‘Guardians of the Galaxy’ is the new ‘Star Wars!’”  Who wants that kinda baggage?  These things need time.  Well how about this: “It Follows” ain’t “Jaws” or “Psycho,” but it might just do for strangers what those films did for beaches and hotels.  You may find yourself keeping a safe distance from everyone as you leave the theater.

The second feature from writer-director David Robert Mitchell, “It Follows” is about Jay (Maika Monroe), a young woman who finds herself pursued by an evil specter.  After having sex with Hugh (Jake Weary), he takes her to an abandoned building and ties her to a wheelchair.  In one of the film’s more harrowing passages, Hugh explains that he’s passed this entity on to her.  She’ll start to see someone following her, and this thing is only visible to those who’ve been afflicted.  It can look like anyone — a complete stranger or even a friend.  (Strangely, the film doesn’t mine the latter as much as it could.)  It moves at a walking pace, but if it catches her, it will kill her.  Jay’s best bet is to pass the curse on to someone else.

Mitchell wears his influences on his sleeve, and there’s a lot to appreciate for horror aficionados.  The basic premise, a quiet neighborhood under threat, brings to mind…well, any number of slashers from the 70s and 80s.  Disasterpeace’s nerve-jangling synth score recalls John Carpenter.  Like so many horror films from generations past, this one could be read as a cautionary tale about adolescent sex.  (“Cautionary” is a strong word — I don’t think it’s the first or even twenty-first concern for Mitchell.  But it’s certainly a clever nod.)  Even the persistence of the threat reminded me of Jason Voorhees and Michael Myers, slowly stalking their prey and eventually catching up with them despite their best — okay, sometimes not-so-best — efforts.

Above all, Mitchell brings an understanding of how to use the frame.  What’s in it and what’s out — that’s really a bedrock of cinema and especially horror.  An oft-cited shot from this film is one where the camera turns 720 degrees.  Jay and a friend are at Hugh’s former high school trying to track him down.  The camera remains outside the office as they consult a secretary.  It turns to reveal a series of windows looking onto the lawn.  Students walk back and forth, but one off in the distance seems to be headed straight for us.  Then the camera passes over an empty hallway and back to the office — they’re still talking to the secretary — and then we’re looking out the windows again.

That student is closer.

When we get back to the office, the bell rings.  We hear doors open, and I started to worry that it would sneak up on Jay in the crowd.  The threat in this film could come from anywhere.  It’s one that the director puzzlingly undercuts a few times by depicting the entity with cheap ghoulish makeup.  More often than not, creepy makeup isn’t creepy.  And I’m sure going to avoid someone who looks half-dead.  But a student in a crowd of students?  Anyone would be a goner.

So much of what’s done with the camera involves smooth and elegant movement, but one of my favorite flourishes involves Mitchell and cinematographer Mike Gioulakis strapping it to the wheelchair that Jay is tied to such that the lens is pointing back at the actress.  She struggles against her restraints, and the whole frame rattles.  It’s used to great effect when she and Hugh are being pursued by the specter in an abandoned building.  As he hurriedly pushes her toward the exit, the camera bounces around her terror stricken face and the dark figure in the background.  It’s as though the whole frame might collapse. 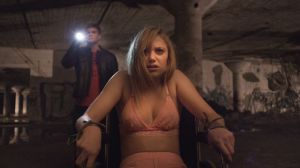 Maika Monroe is really strong in the main role.  There’s a wistful quality to her performance, particularly during the first act.  Once the shit hits the fan, she plays horror with the best of them.  You’re really in her corner, which is why it’s disappointing when the film takes a turn in the second half.  By then, many of the characters have come down with stupid decision-itis, which is a disease prevalent in the horror genre wherein people on screen lose the ability to make rational decisions.  Their actions don’t come from a place of logic, they come from a need to set up more scares.  And this is never more prevalent than in the film’s climax.  I’m going to try and remain spoiler-free, but I really don’t know what the characters intended or what they thought would happen in that scene.

But don’t worry, you’ll be fine.

Just don’t go anywhere with only one exit.

What did you think of “It Follows?”  Comment below!