I’ve been a fan of Guillermo del Toro’s work since 2006, when I first laid eyes on “Pan’s Labyrinth.”  As big productions become more and more homogenized, he remains one of Hollywood’s true (and truly eccentric) visionaries.

I just finished Marc Zicree’s “Cabinet of Curiosities,” which is a book done in the vein of Francois Truffaut’s “Hitchcock,” in that it’s a long series of interviews with the filmmaker himself.  Zicree, an accomplished television writer and big-time nerd, delves into the things that make del Toro tick. 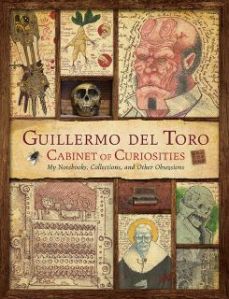 The book offers a pictorial tour of Bleak House.  The director’s self-described man-cave is home to an astonishingly large collection of comics, props, art and other memorabilia.  Del Toro even has a storm room – not for emergency evacuations, this is actually a room that simulates a rain storm.  Gloomy clouds and rainfall are projected on a window to the tune of a thunderous soundtrack.  Another of my favorite details is the eerily life-like replica of H.P. Lovecraft that stands guard over his horror library.  In a section devoted to del Toro’s favorite authors, he lists Lovecraft as an all-timer.

The real highlights are pages from del Toro’s notebooks, which he keeps while working on projects.  Offering some insight on Captain Vidal, a monstrous character from “Pan’s Labyrinth,” Del Toro writes that the Captain is consumed by legacy, and his obsession is embodied by his father’s watch.  Throughout the film, we spend a lot of time with the Captain in a mill on his estate.  Its many angles and gears connote watch imagery, but del Toro also intended it to be an illustration of the character’s unerring expectation that everyone follow his orders.  His is a very regimented existence.

Del Toro typically fills his notebooks with story and design ideas, but they contain everything from fantastic illustrations to his thoughts on art and life.

“Judging a movie after one viewing seems strange to me.  The conscious mind absorbs every image, which took hours of work to create, in a matter of seconds.  But if the image is powerful, if it speaks to the viewer’s soul in some deep way, then those few seconds are enough for love to take shape.”

Though del Toro isn’t all lofty proclamations.  I got a kick out of a passage where he was carefully monitoring the “Pan’s Labyrinth” ratings on Rotten Tomatoes.  One of the things I appreciate most about him is his lack of ceremony.  “I’m not a candy-ass Teletubby,” he tells Zicree.  Actually, I’ve witnessed del Toro’s informality first hand.  At a Q&A he moderated with Christopher Nolan, he applauded the filmmaker for achieving mainstream success while maintaining his strangeness.  Del Toro playfully warned, “That makes me want to kill you…a little bit.”

Something I love about books like this — I’ve already mentioned Truffaut’s but Cameron Crowe’s “Conversations with [Billy] Wilder” is a good one, too — is the way they get me excited about work I haven’t seen.  I’d watched all of del Toro’s films, but this book inspired me to read my first Lovecraft novel, “At the Mountains of Madness.”  [He’s been trying to adapt it for 20-some years.]  It’s rewarding to be exposed to what inspires your favorite artists and entertainers…no better way to understand what makes their creative hearts beat.