If you missed the first half of my list, be sure to check it out. Now, my five most anticipated films of 2015!

The last few years have been a bumpy road for Pixar.  We got “Cars 2” and “Monsters University,” which both felt like cash grabs.  But “Inside Out” will be Pete Docter’s first time in the director’s chair since “Up,” and I’m holding out for the studio’s return to form.  The film has an intriguing premise, centered around small creatures who live in our bodies, each representing and governing a particular emotion.  It’s an original production — only the second out of Pixar’s last four films — by screenwriter Michael Arndt, who previously wrote “Toy Story 3.”  I’m hopeful that he and Docter will bring the balance of humor and pathos that made “Up” and the third Toy Story so remarkable.

I’ve written before about what a valuable and distinctive voice Guillermo del Toro is in pop cinema. After delivering big-budget science fiction films like “Pacific Rim” and “Hellboy II,” del Toro returns to the genre where he cut his teeth as a director. “Crimson Peak” is a horror film with a bang up cast, including Mia Wasikowska and Tom Hiddleston (as husband and wife) as well as Jessica Chastain. It was reported out of Comic Con 2014 that del Toro’s gothic story called for a particularly extravagant chandelier, but the studio wouldn’t approve the expense…so naturally he bought one out of pocket. Del Toro’s passion and willingness to put his skin in the game is one of the things I find most endearing about him. I can’t wait to see what’s in store for his latest.

Even after the excellent “Casino Royale,” Sam Mendes took the Bond franchise to a whole new level with “Skyfall.” He returns to the director’s chair for 2015’s “Spectre,” and Daniel Craig is back as 007. Having established Moneypenny and the new M (played by Naomie Harris and Ralph Fiennes respectively) in the last outing, this new entry reboots another familiar Bond element: the terrorist organization known as SPECTRE. It’s still unclear who’s playing the juicy part of Blofeld, the organization’s leader, but surely it’ll be newcomer Christoph Waltz or Andrew Scott. Either would be a fantastic choice! Audiences are probably familiar with Waltz’s Oscar winning turn in Quentin Tarantino’s “Inglourious Basterds.” Scott is a bit more of an unknown, though if you’ve seen BBC’s “Sherlock,” you know he can play The Evil Mastermind like nobody’s business!

Just when I thought I was out, they pull me back in!

I’ll never not be a Star Wars fan, but after the utter disappointment of the prequels, it was hard not to approach this project with a bit of skepticism. Then they announced J.J. Abrams as the director, a very solid if unsurprising choice. Cast announcements were made: John Boyega, Adam Driver, Max von Sydow, Lupita Nyong’o, Oscar Isaac, Andy Serkis, and…the cast from the original trilogy! And then they released that teaser — filled with wonderful tactile details and scratching all the right nostalgic itches while still leaving a lot of mystery. Instead of doubts, now I have questions: What’s happened in the years since the events of “Return of the Jedi?” How will the original cast be integrated into this new trilogy? What causes the Force to awaken? 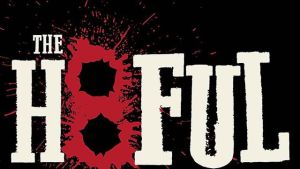 What’s the only thing that could topple Star Wars? Why Quentin Tarantino, of course! A force in his own right, his films are like a full course meal. You get your comedy, drama, action, indelible characters, great music selections, and incredible dialog. You also get fantastic actors, and “The Hateful Eight” is full of them: Samuel L. Jackson, Bruce Dern, Tim Roth, Michael Madsen, Kurt Russell and many more. Set just after the Civil War, it’s about a group of bounty hunters that get entangled in a dangerous plot…but are there any other kind in the world of Tarantino? Of all his films, “Death Proof” is the only one I could take or leave, and the rest I adore. Simply put, he excites me more than any other filmmaker working today.

And here are some honorable mentions:

“Macbeth” — Screen adaptations of Shakespeare tend to be hit or miss, but this one stars Michael Fassbender and Marion Cotillard. Yes please!

Thanks for reading! What films are you looking forward to in 2015?

I’ve been a fan of Guillermo del Toro’s work since 2006, when I first laid eyes on “Pan’s Labyrinth.”  As big productions become more and more homogenized, he remains one of Hollywood’s true (and truly eccentric) visionaries.

I just finished Marc Zicree’s “Cabinet of Curiosities,” which is a book done in the vein of Francois Truffaut’s “Hitchcock,” in that it’s a long series of interviews with the filmmaker himself.  Zicree, an accomplished television writer and big-time nerd, delves into the things that make del Toro tick.

The book offers a pictorial tour of Bleak House.  The director’s self-described man-cave is home to an astonishingly large collection of comics, props, art and other memorabilia.  Del Toro even has a storm room – not for emergency evacuations, this is actually a room that simulates a rain storm.  Gloomy clouds and rainfall are projected on a window to the tune of a thunderous soundtrack.  Another of my favorite details is the eerily life-like replica of H.P. Lovecraft that stands guard over his horror library.  In a section devoted to del Toro’s favorite authors, he lists Lovecraft as an all-timer.

The real highlights are pages from del Toro’s notebooks, which he keeps while working on projects.  Offering some insight on Captain Vidal, a monstrous character from “Pan’s Labyrinth,” Del Toro writes that the Captain is consumed by legacy, and his obsession is embodied by his father’s watch.  Throughout the film, we spend a lot of time with the Captain in a mill on his estate.  Its many angles and gears connote watch imagery, but del Toro also intended it to be an illustration of the character’s unerring expectation that everyone follow his orders.  His is a very regimented existence.

Del Toro typically fills his notebooks with story and design ideas, but they contain everything from fantastic illustrations to his thoughts on art and life.

“Judging a movie after one viewing seems strange to me.  The conscious mind absorbs every image, which took hours of work to create, in a matter of seconds.  But if the image is powerful, if it speaks to the viewer’s soul in some deep way, then those few seconds are enough for love to take shape.”

Though del Toro isn’t all lofty proclamations.  I got a kick out of a passage where he was carefully monitoring the “Pan’s Labyrinth” ratings on Rotten Tomatoes.  One of the things I appreciate most about him is his lack of ceremony.  “I’m not a candy-ass Teletubby,” he tells Zicree.  Actually, I’ve witnessed del Toro’s informality first hand.  At a Q&A he moderated with Christopher Nolan, he applauded the filmmaker for achieving mainstream success while maintaining his strangeness.  Del Toro playfully warned, “That makes me want to kill you…a little bit.”

Something I love about books like this — I’ve already mentioned Truffaut’s but Cameron Crowe’s “Conversations with [Billy] Wilder” is a good one, too — is the way they get me excited about work I haven’t seen.  I’d watched all of del Toro’s films, but this book inspired me to read my first Lovecraft novel, “At the Mountains of Madness.”  [He’s been trying to adapt it for 20-some years.]  It’s rewarding to be exposed to what inspires your favorite artists and entertainers…no better way to understand what makes their creative hearts beat.